I came across this tonight on the BBC web page and was a litle concerned, under Technology at the bottom of the BBC webpage is 'Technology' and there was this article by a Susan Watts: 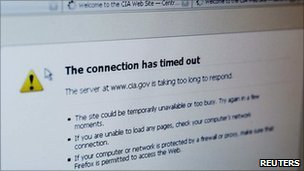 The Lulz Security hacking group that has claimed attacks on high-profile targets including the CIA and Sony in recent weeks has exclusively told the BBC's Newsnight programme that it wants to target the "higher ups" who write the rules and "bring them down a few notches".
Lulzsec has claimed a new scalp - releasing confidential material taken from the Arizona police department.
The anonymous hacking group says they've not been knocked off course, or successfully exposed, by rival hackers who claim to have named them online - apparently because they object to their agenda.
This agenda seems to evolved. When they started out, two months ago, they said they were mainly hacking "for laughs".
In an online Q&A, Whirlpool, the spokesman for Lulzsec, who describes himself as "captain of the Lulz Boat", agreed that their goals now go beyond that: "Politically motivated ethical hacking is more fulfilling".
We weren't able to talk to Whirlpool in person, but met in cyberspace in a private online chat room. In those circumstances it's almost impossible to verify with absolute certainty who you are speaking to, but Newsnight was able to verify that this person had access to the @Lulzsec Twitter feed.
Here are some other edited highlights from the online chat, which began with a question about the Antisec movement to which Lulzsec seem recently to have aligned themselves.

What is Operation Antisec in your own words?
Operation Antisec - our energy has manifested from single-drop personal operations to a global hacker movement against the common people who deem themselves oppressors, namely the world governments... Our Lulz Boat has gathered allied ships in Anonymous and several rogue hacker groups, including prominent Brazilian, Iranian, and Spanish groups.

What do you mean by "who deem themselves oppressors"?
Those who materialise rules to govern the oceans aren't corrupt in nature, but they soon realize that nobody will question rules that they put out, so they use this system to abuse the public. People fear new rules, people fear the "higher-ups", and we're here to bring them down a few notches.

Is it the wrong rules? Or the wrong people making the rules? Would you be ok with rules, but more transparency also?
Rules are rules and we, as a people, are OK with dedicated individuals to moderate them (politicians, officials, etc) - and that's fine. However, when our boat wants to sail into a book store, we're not going to pay Apple for a mobile reading device and subsequently purchase an application allowing us to read books, and then purchase the rights to read the book in text format. Copyright laws - a no-no. Copywrong is a constant enemy of the seas.

So copyright is one of your issues, but that's not why you attacked Arizona police. Can you explain?
Our hit on the Arizona police was to expose the corruption and racial profiling of their battle fleet. In one of the e-mails leaked, they refer to Mexicans as "illegal aliens" and that they need to build a bigger and bigger wall to keep them out. We have hundreds more documents ready to drop on similar corrupt states.

So immigration- quite a leap from copyright - your agenda seems quite broad? It's not just about how they handle information then?
Our targets are global. Corrupt rules and laws covers our attack vector pretty well. Cannonballs will fire at banks, police, and entire governments until we (the internet) are satisfied.

Let me ask you about your name - Lulz - making people think at first glance that you're doing all this "for laughs"... Are you getting more serious? Or was the lulz a misconception/misunderstanding?
We've been plundering treasure chests for laughs since 1 Twitter follower - we released 73,000+ X-Factor contestants when nobody realised we existed, and we've kept up the pace. This latest operation (just before we hit 250,000 followers) invites the rest of the internet to join us, so in a sense this sole mission is serious. But we still plan on having good laughs outside of it.

That's quite a balance to maintain. Some attracted by the Antisec agenda might be put off by the Lulz.
That's a fair point, and we're hoping Antisec extends far beyond our humble boat and into a revolution that maintains itself...

So why are they (other hackers) attacking you and claiming to expose you? Is it because of your actions or your agenda? Or just for attention?
An interesting question. It's my personal belief that they're attacking us out of raw loneliness - they've been stalking people like me for 6 months straight. They feel that we (the Lulz Boat) are their enemies. They keep trying to bring us down, we mock them, they get flustered and make snide comments, we laugh. This has been the cycle for six months. It's quite sad...

I suppose what is interesting to many now is that you have a serious agenda but you're also in it for Lulz. Will there come a time when you have to chose between them? They don't seem to sit well together if you care what the outside world thinks of you.
Another fair point. At some point our operations will have to veer onto the more serious end of things, that's true. Our pirate flag is whitehat, grayhat, and blackhat, so we often entertain many flavours of public. But yes, enjoying the breeze of politically-motivated ethical hacking is more fulfilling.

I say concerned, the only time I have come across this term white hats and black hats is from someone known as Susan Meister, who died on the Apollo in 1971.

The white hats were the scientologists and the black hats were Nazi Germany.

I have personally worried about this death since i first heard of it and continue to worry about it as there does not seem to be any coherent explanation for it, much like Lisa McPherson.

These people, Scientologists like Marty Rathbun and Mike Rinder like to show how they are being 'Fair Gamed'by the psuedo "church" of Scientology, yet NO ONE wants to take responcibility for the deaths of former Scientologists who lost their lives for an unjust cause.

Marty Rathbun and Mike Rinder when are you going to grow some balls!

There is NO LULZ in the deaths of people, especially when they believed it to be their religion.

Scientology is the biggest FARCE on earth!


Posted by Sharone Stainforth at 18:02