Going Clear - The Prison of Belief

Hundreds of Falsehoods - Here's one:,

Let me just put in an updated comment here - then I'll leave..

Well, I looked at some of the various strings here and found that most of you have long-since formed your opinions. Whatevs.

So I suppose it's pointless for anyone to remark that they had a VERY negative opinion of Scientology, based on non-Scientology sources, until they actually READ a Scientology book, made sure they understood exactly what was in it [which had nothing to do with the negative descriptions, interestingly], used the material and found that it worked splendidly, without side-effects.

That was some decades ago. Since then I have been rewarded with a very full life. But I'm not going to put the details up, as they will be further criticized.. C'mon, you know this, and I know it.

But let me just say that to consider the defense of one's belief, ANY belief, as "proof" of the speciousness of that belief is crappy circular logic: "See? He defends this crazy thing, which everybody says is crazy, therefore we know he's crazy." Hmmm..

I could go on.. But I do know that sooner than later this whole thing will pass and Scientology will still be around and doing very well. Why? Because when people find out what it REALLY is - not 'aliens' or 'mind-control' or 'The Secret Mysteries of Schmoobah', they love Scientology and will continue to practice it and support it and protect it.

Anyway, this is my last post. Why? Well, there's an old saying - NOT written by L. Ron Hubbard - and it goes like this: "Never fight with a skunk - He LIKES the smell."

Simply.. The author blatantly ignored the facts.. This is a sworn deposition by one of the Church of Scientology Executives who was apparently never even interviewed for this book. And this is just one of hundreds of items which show that the book is libelous. Read this:

I, Guillaume Lesevre, hereby declare and state as follows:

1. I am 63 years old, of sound mind and body, and not under the influence of any drug or other substance that would affect my memory or ability to tell the truth. I have personal knowledge of the facts that I set forth in this Declaration, and if called as a witness in any proceeding, I could and would competently testify to these facts.

2. I have prepared this Declaration by choice, not compulsion, as an exercise of my own free will, and without any pressure, coercion or duress concerning its content or preparation from anyone.

3. I have been a Church staff member and a member of its religious order, the Sea Organization, for the past 39 years.

4. In his planned book, Going Clear: Scientology, Hollywood & The Prison of Belief, Lawrence Wright uses my name with incidents in which I was allegedly the "victim" of physical abuses. These so-called incidents never occurred. For example, Wright's allegation that the leader of our religion would have banged my head against that of another Church senior executive resulting in "blood coming out of my ears requiring medical attention" is beyond preposterous. The truth is: it never happened.

5. There is another allegation in Lawrence Wright's book where I reportedly would have again been the "victim" of physical abuses in order to obtain from me the admission of some supposed wrong doings. This incident never occurred.

6. These allegations of physical abuse are false and by their nature defamatory in the extreme. They are damaging to both my and my family's reputation.

7. Lawrence Wright never even bothered to contact me to verify whether any such incidents had actually occurred before he wrote them in his book. I have never met, spoken to or heard from Lawrence Wright, although I am very easy to contact. Literally tens of thousands of our parishioners have written to me over the years and my name is well known amongst them.

8. Having worked for over three decades at Church of Scientology International, I knew the sources cited by Wright in his book. One of his main sources is Mark Rathbun. Lawrence Wright states in his book that Rathbun was "one of the most powerful figures in Scientology". This is ludicrous. During and since the time Rathbun was around, I have worked at the top echelon of the Church. He never was a participant in any way on international management matters. He was solely working on external legal affairs.

10. In further evidence of this, we hold international events nine times a year to keep all our parishioners abreast of the Church activities and our international expansion. I spoke publicly in over a hundred of these events that are broadcast to Scientologists in 16 languages and 100 countries. Mark Rathbun never appeared in such events.

11. I am confident that the vast majority of Scientologists never knew who or what Mark Rathbun was.

12. Concerning the "physical abuses" Lawrence Wright alleges in his book, in my 39 years as a Church staff member and executive, the only person I ever saw engaged in such abuse is Mark Rathbun himself. Specifically, in the early 2000s and following his repeated failures on legal assignments, Mark Rathbun engaged in physically abusing some Church staff. He even did this to me on exactly three occasions.

13. Mark Rathbun physical abuses of Church staff members, including those he directed at me, where committed by him while the ecclesiastical leader of the Scientology religion, Mr. David Miscavige, was away from the Church's international headquarters.

14. Upon his return at the end of 2003, Mr. David Miscavige found out about this and immediately removed Mark Rathbun from any and all positions of authority--permanently. He was demoted to a janitorial position, while we kept on assisting him (including financing full medical support for various physical problems he had).

15. Mark Rathbun could not deal with having lost whatever authority and status he had enjoyed and left the Church unannounced. Unable to move on with his life, Rathbun years later launched his orchestrated attacks in the media. It is only then that we found out that Mark Rathbun had suborned perjury while he was working in the Church legal arena. The Church only found out about Mark Rathbun's crime when he bragged about it to the St. Petersburg Times in 2009. Up till then he had carefully withheld this crime from the Church leadership.

16. I have worked for thirty one years straight under Mr. Miscavige and he is the best friend I ever had. In just the last 6 years, Mr. Miscavige's actions have resulted in a complete renaissance for Scientology.

I declare under penalty of perjury that the forgoing is true and correct. 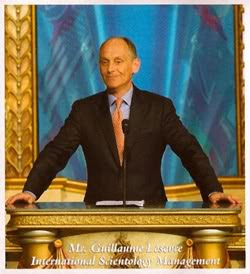 "In it the leader of Scientology, David Miscavige, talks literally of their plan for world domination — "spearheading the crusade for a clear planet" — and there is talk of a scheme to move the church to other planets too. On earth he claims over a billion followers, a complete takeover of the Colombian police force and that Bolivian president Evo Morales has started in the cult. It also becomes evident where the millions of dollars Scientology forces converts to pay to ascend its ranks goes — they have a yacht, a hotel, are expanding furiously into some prime real estate and translate and distribute millions of books and pamphlets across the world. The full three-hour video, filled as it is with bad CGI, can't have been cheap either."
http://www.youtube.com/watch?v=r-NW0e5qSjc

Insane Scientology Propaganda.
"Our source for the video was in the church for seven years, and rose to a senior position before he left recently. When he eventually got out they sent people to his place of work to tell his boss he was secretly a convicted rapist and pedophile. He did not want to be named for fear of further persecution."
http://gawker.com/5426671/scientology-the-crusade-continues?skyline=true&s=x

If you haven't seen the above two videos, you really should, especially the second one, although not L. Ron Hubbard's voice, some of the wording is straight out of LRH's mouth.
Posted by Sharone Stainforth at 04:28